Hey, I Know that Person!

In my novel that I’m working diligently on to indie publish in the coming year entitled, St. Anne’s Day, one of the main characters featured is Peg McMaster. Peg is an elderly woman, who, to put it mildly, is a crackerjack. All writers draw from their personal experience, and I’ve realized that Peg is an amalgam of my maternal and paternal grandmothers—Gertrude and Agnes.

While my grandmothers got along well and enjoyed each other’s company, they were very different in so many ways. Grandma Gert smoked, swore (nothing obscene but vulgar), loved to read and watch movies. She was very lax with regards to rules and regulations. Although Catholic, she rarely went to Mass, but she donated lots of money to various Catholic charities from the Indian Missions--who sent her lovely tokens of appreciation like a thermometer that was imbedded into the white plastic skeleton of a fish--to the Shrine of Sainte Anne de Beaupre.

Grandma Aggie on the other hand never swore, never smoked and used to smash the empty beer bottles from the beer her sons had drunk with a hammer so the garbage man wouldn’t know they had liquor in the house. We once caught her in her bare feet, and you would have thought we had found her streaking she was so embarrassed. She attended daily Mass and ate fish every Friday even when you didn’t have to anymore.

Somehow when I was creating Peg’s character, I managed to meld their personalities into one wise-cracking, devoutly religious old woman named Peg, who sometimes steals the show from the main characters, Anne Lyons and Gerry McMaster.

If you are a writer, has there been a family member or friend who has influenced the development of one or more of your characters?

If you are a reader, has there ever been a character in a book that closely resembled someone you actually knew?

And if you tell me Edward from Twilight or Hannibal Lecter, from Silence of the Lambs, I’m going to freak!
Posted by Janice Lane Palko at 10:26 AM 4 comments:

Did you ever see The Simpsons episode entitled “The Father, Son and Holy Guest Star”? In the episode, Bart is expelled from public school and enrolls in St. Jerome’s Catholic School, where Fr. Sean (voiced by Liam Neeson) leads Bart to convert to Catholicism. It is one of my favorite episodes of all time. The scene I like the most is when Marge wonders what will happen when they die, and she envisions Bart and Homer going to heaven, which is partitioned into Protestant Heaven and Catholic Heaven. In Protestant Heaven, the people are dressed in tennis togs and have names like “Biff.” Catholic Heaven is a rambunctious place, with the Irish fighting, Mexicans doing the hat dance, and Italians singing, eating, and drinking.

While I don’t write graphic sex scenes and use a profusion of profanity, I try to write how real people behave and speak, which does not conform to the guidelines. Sometimes I wonder if the Bible would pass muster with some of the more restrictive publishing houses.

When you boil it down, the Bible is a very racy book. For example, we’ve got the rape of Dinah and her brother’s who seek revenge by duping the rapist and his tribe, the Hittites, into being circumcised. While they are all lying around with ice packs on their groins (did they have ice back then?), the brothers murder them all. We’ve got King David playing peeping Tom and watching Bathsheba bathing naked and then bumping off her husband, Uriah, so he can have her. We’ve got a financial scandal befitting the Madoff family when Jacob swindles Esau out of a fortune. The Bible is filled with people who drink, dance, lie, cheat, curse, kill—you name it and they’ve done it.


My grand experiment in going indie is to satisfy this question: Is there a market for contemporary fiction with a Catholic flair? My stories are not sermons disguised as stories, but I feel many of today’s writers fail to take into consideration that readers as well as story characters have hearts, minds, and souls. I’m hoping to attract Catholics who feel deprived of good books that are realistic and yet have a message, and I’m inviting Christian fiction readers to take a gamble on me. If we, who have cultural differences, can meet over the message, that would be heaven—and one that’s not partitioned!
Posted by Janice Lane Palko at 12:13 PM 2 comments:

For decades, I have been seeing the numbers 11:11 all the time.  It seems that every time I look at the clock those numbers appear.  I don't really believe in numerology, but it has happened so often, I thought I'd Google those numbers on the Internet to see if it has any significance. Boy, have I been asleep at the wheel here.  It seems I'm not alone in seeing these numbers.  In fact, there are numerous websites devoted to the meaning of this number, and according to the 11:11 Facebook page--yes it has a page--that I'm one of more than 1 million receiving messages from celestial guides.  Look out Miss Cleo!


One other time I was told I had a direct line to great beyond.  I went to a festival at LaRoche College with my friend, who was a student there.  They had a palm reader who picked up my hand, and then looked up at me and said, "You have the occult X."  Apparently, the lines in the center of my palm form a perfect X, which unbeknownst to me must be the USB port for making contact with the higher realm.

I like getting the 11:11 messages although I don't know what they are trying to say.  But if I start making sculptures out of my mashed potatoes and take off for Devils Tower, then you know I've gotten the message.

Posted by Janice Lane Palko at 9:02 PM No comments:

I've written before how I've become a Maddict--someone addicted to the TV show Mad Men.  As a latecomer to the program, I've been trying to catch up on the back episodes before the new season, the fifth one, commences.  I'm about half way through the fourth season and something that happened in the last episode I watched struck me as to why this show is so acclaimed.  It illustrated something that all aspiring writers need to keep in mind.  And that is how to handle back story.


Most fledgling writers fall into the trap of using the "information dump," when in the first chapter they give us everything they know about the character, leaving nothing for the reader to wonder about and compel them to continue reading the book.

For example, the Mad Men episode I watched showed how two of the show's major characters, Don and Roger, initially met and how Don came to work for the advertising firm.  We only learned this bit of back story in the fourth season.  A novice writer, had he or she been writing the the program, might have told us this part of the story at the beginning, when it would have been more effective to reveal it later.

Whether consciously or subconsciously, when a reader picks up your novel, hopefully questions are raised in your reader's mind--questions that will spur the reader to continue on with your book to get an answer. (Don't forget to answer them.)

Writing a novel is a bit like being a stripper.  What stripper takes to the stage already naked?  No, she peels off the layers, seductively, one at a time--until THE BIG REVEAL.

As writers we must do the same to generate interest and money (hopefully more than a wad of $1 bills stuffed in your G-string!). 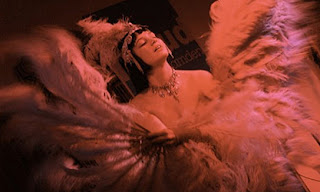 Posted by Janice Lane Palko at 10:30 AM No comments:

You'll Shoot Your Eye Out

Hi Readers of my blog and of Northern Connection magazine (where I am the Executive Editor),

As I promised in my column, here is another prompt for those of you looking for more ideas to spur conversation during the holidays.  Since the Christmas season will soon be upon us, how about a question about presents.  In the Christmas Story, Ralphie wants a Red Rider BB Gun.  His wish came true.  Was there ever something you really wanted for Christmas?  Did you get it?   If not, were you very disappointed?

My brother always asked for Rockem Sockem Robots, but never got them.  It became a running joke in our family.  When we were in our thirties, I got his name in the family grab bag, and I bought him Rockem Sockem Robots.  We all laughed and had a good time battling to see who could be the first to "knock his block off."


Posted by Janice Lane Palko at 2:46 PM No comments: