As a teen growing up in the 1970s, I went to a lot of rock concerts from Bruce Springsteen and Styx to Foreigner and Tom Petty to Kansas, Queen and many others. Back then there was little access to rock stars. There was no following them on Facebook, Twitter or Instagram. They made very few appearances on television outside of The Midnight Special or Don Kirschner’s Rock Concert. Most news about rock stars came through magazines like Creem, Circus, and Rolling Stone. Consequently, rock stars were treated as . . . well, as rock stars. They were lionized, placed on pedestals, and lived larger than life in the minds of most fans.

For instance, graffiti in London in the mid-1960s proclaimed about Eric Clapton that “Clapton is God.” John Lennon of The Beatles stirred controversy when he cheekily stated in March 1966 interview that The Beatles were “More popular than Jesus.” Led Zeppelin’s lead singer Robert Plant was proclaimed “The Golden God.” 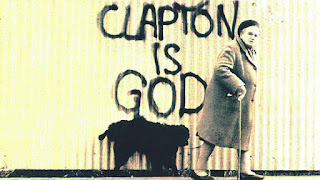 Fast forward four decades, and many of these rock stars are still touring. Several years ago, Jergel’s Rhythm Grille in Warrendale, brought Lou Gramm, Foreigner’s lead singer, to town, and we happened to get tickets. Before the concert began, I went to the Ladies Room, and as I left, I had to pass through a vestibule and glass doors to get back into the main room. And guess who held the door for me? Lou Gramm. When I got back to our seats, I told my husband about it and laughed that had that happened 40 years ago, I’d have been delirious, but now he was just an average-looking middle-aged man, and I just said thanks.

We saw The Who about five years ago, and although Pete Townsend didn’t jump as high while strumming his guitar and Roger Daltrey laughed about how his voice would probably crack when he screamed on We Don’t Get Fooled Again, the concert was great.

In 2019, Phil Collins came to town. He can no longer play the drums for health reasons, and on the big screen with his glasses and bald head, he looked like my dad singing In the Air Tonight. But Phil still had it and made the concert fun and amazing.

Rod Stewart came to town a few years ago too. Everyone in the crowd had a good laugh, when on the big screen, the cover of a Rolling Stone issue with a picture of him in 1978 appeared. It was published when his song Da Ya Think I’m Sexy came out. He quoted the article back then where he said he didn’t want to be in his 60s and still singing that song. It would be ridiculous. He laughed, and said, “Guess what, I’m 72 and I’m singing it tonight.”

This past October 4, I saw The Rolling Stones for the first time at Heinz Field, and although Mick Jagger is nearing 80, he still strutted, posed and rocked the stadium. At one time, I looked at my husband and said, "Forty-five years ago, did you ever think you'd be in your sixties and watching Mick Jagger still performing?" 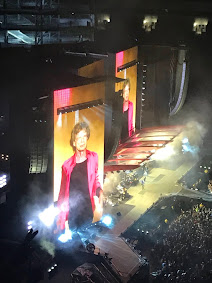 The view from the cheap seats.

But with all these concerts there was a difference from the ones I attended when I was in my youth. From Phil Collins to Mick Jagger—all of them seemed to be more humble, relaxed and happier. In fact, Mick quipped, that sadly, he hadn’t had much time to spend in Pittsburgh; he didn’t get a chance to go “to the Warhol and gaze at myself.” It’s not often that an entertainer who comes to town has a portrait hanging in a museum. But rather than being haughty about it, he seemed to be amused by it all.

Time catches up with everyone.  These rock stars are no longer gods but mortals just like the rest of us. Aging is the great equalizer. And I find myself liking and appreciating these performers even more now that we have become acquainted with their human sides.

This article originally appeared in the November issue of Northern Connection magazine.