Have you ever read Elie Wiesel’s masterpiece autobiographical Holocaust account Night? The book details how the Nazis rounded up the Jews in his village, in what is now Romania, when he was a teen and how his family was sent to the Buchenwald and Auschwitz concentration camps. It is a short book and brutal to read, but one you won’t ever forget. 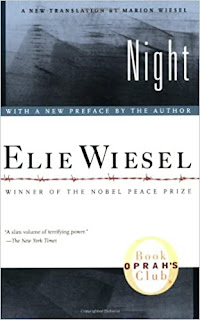 I’ve read many Holocaust accounts, but there is one part in the book that has stuck with me even though I read the book more than 10 years ago. It occurs early in the narrative when Moshe, a fellow villager, is deported by the Nazis and escapes death to return to the town to warn everyone that the Germans are rounding up Jews and murdering them.

You’d think the villagers would appreciate the heads-up; however, what he tells them is so unfathomably evil, that they dismiss him as crazy. Who can comprehend that much hate? They conclude that could never happen. Sadly, not long after that, Moshe is proven to be a prophet of doom; the Nazis come for the whole village. Of his family of six, only Elie survives the concentration camps to tell of its horrors.

As a writer, I’m a bit of an information junkie; I like to know what’s going on. If you are paying the least bit of attention, you know that we are experiencing protests, division, riots and violence in our streets. Some pundits have opined that we are on the verge of a second civil war or that we are at the beginning of a complete cultural and societal collapse, much like Ancient Rome.

If either of those scenarios is true, we are in for a long, painful ordeal, and who knows what life will be like on the other side. It’s all very heartbreaking and frightening. So much so, that for sanity’s sake, I find myself trying to walk a fine line. I find myself pulling back from the news yet wanting to stay informed.

I know others are feeling this way too; I’ve heard several people remark that they don’t even watch the news anymore. They can’t bear it. I can sympathize and have at times withdrawn to find solace in prayer, family, friends and the soothing beauty of nature.

But then I remember the book Night and how the villagers were warned about what was coming, and I find myself being sucked into watching the news, scouring the internet, and scanning social media, trying to read the tea leaves to discern what’s in our future, as if knowing what’s ahead will inoculate me and those I care about from suffering.

Had Elie Wiesel’s family heeded the warning of Moshe would they have lived? Maybe. But with six million Jews perishing in the Holocaust, 20 million military personnel and 40 million civilians dying in World War II, even if they had not been murdered, their lives and much of the world’s would never be the same.

For now, I plan to try to walk that fine line; I plan to stay informed and to take time to hope and pray for the best—emphasis on prayer—because if things do go south, and the unthinkable happens, unlike the Wiesel family, we have no good options for escape.

Abraham Lincoln once described America as always being the “last best hope of earth.” Let’s hope and pray that we avert this strife, that we don’t destroy ourselves and that we continue to be a haven of hope for generations to come.

Posted by Janice Lane Palko at 1:13 PM No comments: