It’s that time of the year, when we don our winter gear. Have you notice how much more technologically advanced cold weather wear has become? I have a “puffer” coat that is packable and so lightweight, it hardly feels like I’m wearing a coat. It can also be stuffed into a small pouch and packed into luggage without taking up too much space or causing your baggage to go over the weight limit. The new garments also dry quickly.

That wasn’t the case when I was growing up. When I went to first grade in 1966, I remember I had a wool cloth coat with matching leggings. The leggings were like fishermen’s waders only make from the same material as my coat. They were so thick that I looked like Randy in The Christmas Story, when he couldn’t put his arms down from so much bulk. I also remember that they were itchy and took forever to dry if they got wet in the snow. I can still recall the smell of wet wool!

Winter footwear was no better back then. I had red rubber boots that you slipped over your shoes. When removing them, your shoe inevitably came off with them, which resulted in putting your bare foot down in a pile of melting snow. What a step up it was to get lined boots that you just slid your foot into—sometimes with the aid of Town Talk bread bags!

Most kids hate wearing coats, but I did have one coat that I loved. I got it in fifth grade. It was forest green corduroy and had a white fur collar, but what I really liked was that it had a matching fur hat that was styled like a bonnet and tied under the chin with strings that ended in matching fur pompoms. Talk about 60s style!

In seventh grade, maxi coats came into fashion, and my friend got one that I would have traded all the Love’s Baby Soft perfume in the world for. It was navy blue with a hood, but what was really cool about it was that on the back was a scene made from felt of a pathway that lead to a castle. The “castle coat” had killer style!

In high school, I proudly sported my SBA (St. Benedict Academy) high school jacket, which had my name and grad date embroidered on it. That jacket was a great ice breaker. If you were out the mall, ice skating, or at the movies, it wasn’t uncommon for boys to come up and say, “Hey, you go to SBA? You know my sister? Or cousin? You got a boyfriend?” For dressy occasions, I had a camel coat.
My younger brother often sported a lined plaid CPO jacket, but if I thought my boots were ugly, his galoshes were ghastly. They were usually made of this drab black/green rubber and fastened with hooks and what I thought looked like little ladders.

Winter garb back then may not have always been comfortable, but it was certainly durable. My late Uncle Bill Calvert was in the Navy Seabees where he was issued a peacoat back in the early 1950s. His daughter, my cousin, Lynn, wore it in the 1970s, and then she passed it along to my brother Tim, who wore it in high school in the 1980s. When he outgrew it (my uncle was only about 120 pounds when the coat was issued to him), my sister-in-law, Margi, took it.

Today, that coat is at Kent State University, where my nephew, Ryan, the architect major, wears it around campus. When you love a coat like my Uncle Bill’s classic pea coat, it’s great that it lasts, but when it comes to wool leggings, I’m glad they died a slow soggy death.

This originally appeared in the Winter issue of Pittsburgh Fifty-Five Plus magazine.

https://issuu.com/northernconnectionmag/docs/winter20_pffp_issuu/24
Posted by Janice Lane Palko at 6:28 PM No comments: 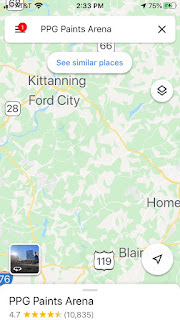 This originally appeared in the January 2020 issue of Northern Connection magazine.
Posted by Janice Lane Palko at 2:58 PM No comments: