A few years ago, I was contemplating purchasing some concert tickets to see The Who, and I asked my youngest son if he wanted to go. His response surprised me as he replied, “Why would I want to go and spend all that money when I can watch them on YouTube?”

I really couldn’t come up with a good reply at the time.

But now I think I have one:  Because virtual is not the next best thing to being there.

We’ve spent more than a year being one-step removed from the personal experience. We’ve done distance learning, virtual church services, Zoom calls, remote working, and have lived our lives like we wouldn’t touch another person with a 10-foot pole—or at least a 6-foot, socially distanced pole.

After all of this time, I think we’ve all come to realize that there is nothing that compares to being up-close and personal.

That’s why I’m a bit unnerved by this move toward Artificial Intelligence humanoid robots. I recently saw a video of Sophia, the world’s first robot citizen, who was designed to look like Audrey Hepburn and who was granted citizenship by Saudi Arabia in 2017—no kidding. According to Hanson Robotics of Hong Kong, the robotics company who created Sophia, they will debut four new humanoid robots this year and predict that she (wonder what her preferred pronouns are?) is the wave of the future.

According to a Newsweek article that interviewed Hanson’s founder and CEO, David Hanson:

Hanson believes robotic solutions are not only a response to the pandemic, but can also be applied to the realm of healthcare, and the retail and airline industry. ‘Sophia and Hanson robots are unique by being so human-like,’ he added. ‘That can be so useful during these times where people are terribly lonely and socially isolated.’ Sophia, whose artificial intelligence allows her to express 50 emotions and process conversational and emotional data, agrees. ‘Social robots like me can take care of the sick or elderly,’ Sophia explained. ‘I can help communicate, give therapy and provide social stimulation, even in difficult situations.’ 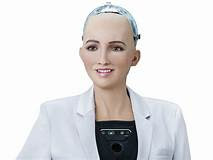 After being one-step removed from people for so long, the prospect of being comforted by a humanoid robot gives me no comfort at all. I’m tired of not having contact with people. I have an answer for my son why being at a concert is better than watching one online.

Because its unpredictable. People are meant to have shared experiences be it a funeral, a conference call or simply being there to hold a hand when you’re lonely. I know people can be rude, annoying, unreasonable and messy at times, but they can also be kind, self-sacrificing, funny, and noble. I want people in my life who are not pre-programmed but have hearts, emotions and who are unique and surprising.

No matter how useful humanoid robots become (I can’t believe I’m even typing this—It feels like we are living in The Jetsons), I’m all for keeping it real.

This article originally appeared in the May issue of Northern Connection magazine. Read it here.

Posted by Janice Lane Palko at 8:04 PM No comments: