Do you collect anything? Aside from the occasional Christmas ornament I pick up whenever I travel to a new destination, I don’t collect anything material. However, I do have a collection of intangible treasures that I regard as priceless.

One gem is the first time I saw a shooting star. I was probably eleven years old, and we were at a picnic playing hide and seek. As the call of “Olly olly oxen free” went up, I emerged from my hiding place to run across a dark field to home base, when on the horizon before me, a shooting star streaked across the sky. I was so amazed by the sight that I stopped short and stood in the black field with my mouth gaping in awe.

Another gem I collected twelve years ago while on a cruise in the Caribbean with my family. It was that magical time of day when it’s still light but the sun is sinking and everything drips with melting gold. There were several other ships in port in St. Maarten with us, and as evening drew near, one-by-one the ships left for the open sea. The water was flat and the wind was nil. As my dad and I stood at the rail on the upper deck, we watched as each ship sailed into the setting sun. But what I will never forget is how each of their wakes left a golden filigree on the placid surface of the sea for miles.

I picked up another treasure several years ago while on another cruise–this time near Mexico. After spending the afternoon in port, we came back to our room to recuperate before getting ready for dinner. While my husband and son lounged in our cabin, I went out onto the small veranda off our room, sat in the lounge chair, and closed my eyes to relax. As I was dozing, I was awakened by the sound of several shipmates on the decks above and below me shouting, “Whale!” I glanced to my right, and there beside the ship was this enormous whale leaping out of the ocean. I couldn’t get to my feet fast enough to open the cabin door and yell, “Come quick. There’s a whale!” As my family watched this sleek whale put on a show, I looked above and below us. Hundreds of passengers had gathered on the verandas of the various decks. There were so many people lining the rails on this side of the ship, it was a wonder we didn’t tip.

Just last month, I added a new treasure to my collection. We had tickets to see U2 at Pittsburgh’s Heinz Field. It was rather chilly for June. And cloudy, but that is not unusual for Pittsburgh. We had cheap seats, high in the upper deck, but as they gave a glorious view of Pittsburgh’s skyline, I didn’t mind sitting up that high. But what really impressed me was something that happened moments before U2 took the stage. Although it was not raining anywhere in sight, a red rainbow formed over the field and terminated above where the group would soon appear. Now, I’ve seen many rainbows, but this was unusual because there was no precipitation and because you could not see any other colors of the spectrum but red against the leaden sky.


It seemed that everyone saw the phenomenon at once as a gasp arose from the crowd and thousands of cell phones were held aloft to capture the beautiful sight. The red rainbow stayed for several minutes, and then before it faded, it cast its light on the surrounding clouds turning them a rosy pink. Sure, U2 was good, but I’ll never forget that red rainbow. 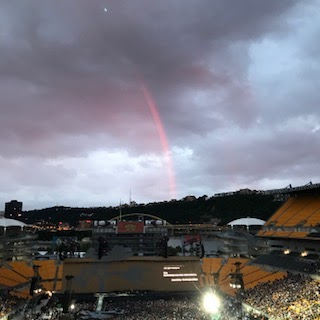 I can’t remember where I read this, but someone once observed that humans are continuously fascinated by God’s handiwork but easily become bored with things made by human hands. Case in point. If you grew up during the 1960s and 70s, you may remember the nation’s fascination with the space program. People clustered around their televisions to watch Neil Armstrong walk on the moon, but with each successive trip into space, less and less people paid attention. Yet, people never get bored with watching something as simple as a sunset.

Why does that happen? Clearly, there is something embedded in the human soul that longs for the Divine. The summer provides us with more opportunities to be out in nature and to observe God at work in His creation. Keep your eyes open. It may be something as simple as a hummingbird buzzing your garden or as spectacular as bioluminescent ocean waves pounding a beach or the flash of the Northern Lights that give you a glimpse of His glory. You never know what treasure He may cast before you that will spark your sense of amazement and that will become a cherished addition to your treasure chest.

This originally appeared on the Catholic Writers Guild blog.
Posted by Janice Lane Palko at 8:35 PM No comments: