I Lost a Dog

Around 10 years ago, I wrote a piece for this column called I Love a Dog. The article told of taking care of my daughter and son-in-law’s dog, new puppy Penny, and about how I, as someone who have never had a pet before, was clueless when it came to dogs. As I stated in that article, I did not have pets as a kid because my brother was severely allergic to them, and while I liked dogs, I had never spent much time with them.

Penny, the Pembroke Welsh Corgi, was the first dog I ever cared for. I went from someone who gagged when picking up her “presents” left in the yard to poop-picker-upper pro. I learned to sense what she wanted and knew where to look for her if it thundered—hiding in the bathroom behind the toilet. I marveled at how she could collapse her stubby legs and scoot under a bed that had less than a foot clearance. She was such a sweet, gentle pooch, she paved the way for our family getting our first dog, Mickey, three years later.

There was something else I was clueless about when it came to dogs—and that was how sad it is when you lose one.

After 11 years of furry love, Penny left us on June 28. Nearly two years ago, she was diagnosed with a cancerous tumor on her paw and had surgery to remove it. Although she was advancing in age, she was still the same lovable dog as ever. During the last six months, however, she began to experience these distressing episodes where she got severely sick, falling over and ceasing to eat. Thinking that the cancer had spread, we were warned several times that she may be dying, but she always seemed to rally. However, in June she declined rapidly, and her vet advised that the merciful option was to put dear Penny to sleep.

Fortunately, this allowed everyone who loved her to say goodbye to her, petting her, telling her how much we loved her and giving her belly rubs. I don’t know if she sensed this was the end and wanted to leave us with even more good memories, but on her last day Penny seemed to be infused with energy and spent her waning hours with my daughter’s family doing all the things she loved: fetching balls with the enthusiasm she had when she was younger, snuggling with my daughter during my granddaughters’ nap time, and having a last dinner of her favorite, roast turkey, before my daughter and son-in-law lay on the floor with her as the vet administered the shots and she passed on. 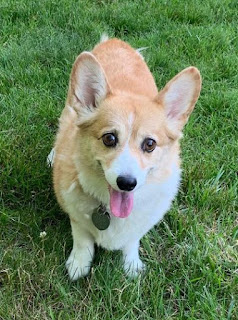 Penny on her last day.

I like to believe that “all dogs go to heaven,” but liking to believe something does not make it so. I am no theologian, so I did a little research on what various faiths believe about what happens to pets after death. A cursory search on the internet, shows that all the major world faiths have no conclusive dogma on what happens to pets when they die.

The Gospel of Matthew, Chapter 6, however, gives me hope:

“Therefore I tell you, do not be anxious about your life, what you will eat or what you will drink, nor about your body, what you will put on. Is not life more than food, and the body more than clothing? Look at the birds of the air: they neither sow nor reap nor gather into barns, and yet your heavenly Father feeds them.”

God doesn’t do things randomly or haphazardly. He doesn’t create something simply to abandon it. He cares for it. If God is love and cares for the birds on earth, the creator of all, in my humble and unlearned opinion, will surely want to be surrounded and glorified by all his creation in heaven.

Penny was pure love in a fur coat, and I’m sure God would enjoy her nuzzles in heaven as much as we did here on earth.  We'll miss you sweet Penny.

This article originally appeared in the August 2021 issue of Northern Connection magazine.