Yesterday we touched on true love and Valentine’s Day when we were discussing St. Anne’s Day.  In the book, Anne suffers a big disappointment in the love department, which got me to thinking about those times when we aren’t “lucky in love.”

Without giving too much away, here is an excerpt from the book where an embarrassed Anne is forced to tell Gerry, the man she is beginning to fall for, that she has not gotten engaged after she’d bragged to him that she would soon be getting married:

“Oops, you OK?” Gerry said as he grabbed her to prevent her from falling.  His fingers were strong and firm on her shoulders.


“Delirious with love, no doubt.”


“I thought maybe you were blinded by the sparkle of your engagement ring.”  He took her purse.


She cast her eyes toward the tin ceiling and tapped her toe impatiently.  “Hard to be dazzled by something that’s not there,” she said sarcastically.


“He asks you to get married and doesn’t buy you a ring?  Oh what a romantic!  Have him call me.  I’ll give this rookie some pointers on how to woo a woman.”


“No need to.  I’m not engaged, Gerry.”  She tried to pull her hand away, but Gerry, looking stunned, held it tightly.

Whether you have been lucky in love or not, you will be a winner when you read St. Anne’s Day.  I hope you enjoy it and will follow my blog, sign up for my newsletter.  Don’t forget to register to win the Starbucks gift card.

Also, I'm offering a free download of my Christmas romance A Shepherd's Song for those signing up for my newsletter.  When I receive your subscription, I will send you the code.

Thanks for stopping by.

Keep warm and keep on reading!
Posted by Janice Lane Palko at 6:46 AM No comments:

Welcome to THE FEEL THE HEAT Beach Book Blast 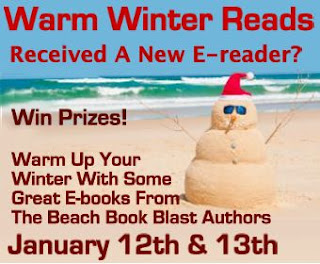 Welcome to my Site!

I hope you are enjoying the Feel the Heat Beach Book Blast.  We figured many of you would have received e-readers as gifts during the holidays and thought it would be great to offer you some fantastic stories to download.

I’m featuring my romantic comedy, St. Anne’s Day.  The book has received great reviews and deals with the age-old of concept of true love.  Anne, the main character, and Peg, the elderly spitfire whom she is caring for, have the following conversation about true love:

“True love?  I think that went out of style years ago.”

Anne wished she could be as sure as Peg, but she’d seen and experienced too much to believe in fairy tales anymore.

“You believe in true love, don’t you, Honey?”

She thought of her parents and how they seemed made for each other.  “I guess I believe it can happen for some people.  But today?  I don’t know.  Times have changed.  It seems rather old-fashioned.”

Don’t forget to register to the right for a chance to win a $10 Starbucks gift card.  St. Anne’s Day would make a great read for celebrating Valentine’s Day.  It is available at Amazon, Barnes & Noble and Smashwords.  There are links to the right that take you directly to those sites.

As a token of my appreciation for stopping by, I'm offering a free version from Smashwords of my Christmas romance A Shepherd's Song for those who sign up for my e-mails.  I don't bombard you with mail, so don't hesitate to sign up.   I'll send you the coupon code when I receive notice of your subscription.

Thanks for stopping by and feel free to invite your friends to the site too.

Keep warm and keep on reading!

Erasing Lessons from the School of Hard Knocks


A year ago at this time, a rapist was terrorizing the North Hills area.  In case you may have forgotten, last January two Ross Township women were accosted outside of their apartment complexes after returning from walking their dogs.  They were forced inside their homes and assaulted.  One of the women was raped while her four-month-old baby was in another room and her fiancé was bound.  Arthur Henderson of the North Side was arrested later that month and charged with a laundry list of crimes in addition to the rapes.

I often drive down McKnight Road, and throughout the past year, whenever I passed by their apartment complexes, I would think of them and wonder what their lives were like now?  How are they coping?   How do you put something that traumatic behind you?

Another person I think about is the mother of the little boy who was killed by the painted dogs when he fell into their exhibit at The Pittsburgh Zoo.  What was her Christmas like?  How do you face a New Year without your little boy? When she closes her eyes at night, is she tormented by scenes of her son that no mother should ever have to envision?

My heart aches for all three of those women, but for all the sadness, fear, and pain I may feel, I know it doesn’t even approach the depth of their suffering.  Other than saying a prayer for them, there isn’t much else anyone can do for them.  That is until now.

Recently, I heard a report about how neuroscientists may have discovered how to erase painful memories.  In this particular study performed at Stanford University on mice, the rodents were administered a shock every time they were exposed to the scent of jasmine.  After conditioning the mice, each time they smelled jasmine, they exhibited signs of fear, waiting for the accompanying shock.  Before falling asleep, the experimental group was administered a drug while smelling jasmine that blocks protein synthesis in the part of the brain that is believed to store painful memories.  When the mice awoke and smelled the jasmine again, they exhibited much less fear.

This is not the only study trying to unlock how memories are established and retained. If you are like me, you probably are under the assumption that a memory is a fixed thing in your mind, kind of like a DVD recording, and never changes.  However, scientists have learned that remembering something actually changes that event in your mind.  As the author Jonah Lehrer said in a February 2012 Wired Magazine article, “New research is showing that every time we recall an event, the structure of that memory in the brain is altered in light of the present moment, warped by our current feelings and knowledge. That’s why pushing to remember a traumatic event so soon after it occurs doesn’t unburden us; it reinforces the fear and stress that are part of the recollection.”  They call this process of restoring memories reconsolidation.

Like the other study, the one cited in Wired Magazine found that synthesizing a protein is involved in reconsolidating the memory.  Eventually, researchers believe that soon they will have a pill capable of blocking that protein and erasing painful memories.

When I heard about this pill, I immediately thought if anyone would be deserving of this treatment it would be these women.  But after thinking about it, I’m not so sure.  This magic pill raises many issues.  Among them educational ones.  Some of the most important lessons of my life, I learned while attending the “school of hard knocks.”

Fortunately, I never suffered such traumas as assault or the horrific death of a child, but the things that I’ve gone through have taught me much and have made me a better person.  At the time I was going through them, a pill to make things better would have sounded mighty attractive, but in hindsight, I wouldn’t trade those times.  Countless stories have been written how people have come back from overwhelming challenges to be better than ever.  The saying if it doesn’t kill you, it makes you stronger is true, but unfortunately, there are some who can’t seem to put the past behind them.

I guess the efficacy of this drug would have to be determined by those who are suffering and by their doctors.  My only concern is how often something starts out sounding good and then morphs into something else.  For instance, plastic surgery was developed to correct the deformities suffered during war, but now we have Hollywood starts going under the knife for every little perceived imperfection sometimes with disastrous results.  With the power to wipe out painful memories, we may also do away with one of the most wonderful things about being human—being able to arise from adversity and learn from life’s hard lessons.

This article appeared in the January 2013 issue of Northern Connection magazine.
Posted by Janice Lane Palko at 10:49 AM 2 comments: