When Paula Green, our Trivia writer, handed in this month’s trivia on the 50th anniversary of the U.S. putting the first men on the moon, I couldn’t help thinking about where I was that night. I was nine when astronaut Neil Armstrong stepped onto the moon, so my memories of that big event are a bit foggy and self-centered; all my recollections focus on what was important to me at that time. 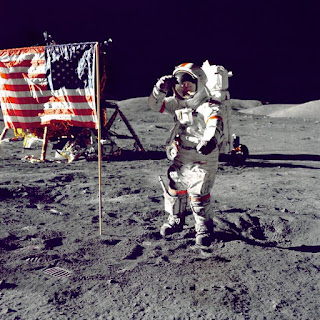 I am a child of the space age; the first generation to grow up with space exploration. President Kennedy launched the space program the year after I was born, and all throughout my childhood outer space played a part. I watched The Jetsons, My Favorite Martian and Lost in Space and listened to Dark Side of the Moon, Rocket Man and Space Oddity.

When I was in elementary school at St. Athanasius in West View during a space launch or splashdown, for lack of an auditorium, the teachers would move all the students out into the center hall where we would sit on the floor in front of a black and white TV mounted high on a tall stand. On a fuzzy black and white screen, we’d watch rockets blast off or see returning space capsules plunge into the ocean—all in the name of science education. Most of the time, the kids just goofed off, pulling hair, girls whispering to one another or the boys wrestling. I don’t remember much about the other space voyages.

However, the moon landing was different. Like many families on July 20, 1969, my family was gathered in our living room in front of our black and white TV. I remember being sleepy and bored waiting for what seemed like forever, for the hatch to open on the lunar module. I remember my dad pointing at the screen and telling us to pay attention, that this was historic, that someday we’d all be glad that he’d made us stay up to watch this. I also remember my little sister, Joanne, who was four, crying and wanting to go to bed, but my dad insisted that she remain awake. I remember everyone holding their breath as Neil Armstrong stepped on the moon and thinking, “So, it’s not made out of green cheese after all.” My dad’s admonition worked; I still remember the moon landing, and yes, I’m glad he made us watch it.

As I grew older and space exploration became more commonplace, most of us only paid attention to it if something tragic happened like Apollo 13 or the Space Shuttle Challenger explosion. I can’t remember who said it or where I read it, but someone once commented that humans quickly get bored with things of their own creation but never tire of God’s, how once we landed on the moon, most people lost interest in space, yet after all these millennia, people still gaze in wonder and awe at the moon, God’s creation.

I think that is a fair assessment. I was never a space enthusiast, and I think the importance of the moon landing was lost on my nine-year old mind, but I still marvel at the moon on a cold winter night or love to gaze up at it on a warm summer’s evening from my deck. However, fifty years later, I have a greater appreciation for the moon landing than I did back in 1969, and I wish I remembered more. What were the adults were thinking back then? Did people pop champagne in celebration or set off fireworks? What was conversation around the water coolers in America afterward?

This month when I look up at the moon on July 20, 2019, the adult thoughts that I didn’t have back then will be streaking through my brain: What a dream! What a challenge! What a risk! What an accomplishment!

Our astronauts, our nation—we were on top of the world when we were on the moon.

This originally appeared in the July 2019 issue of Northern Connection magazine.
Posted by Janice Lane Palko at 9:30 AM No comments:

Below is the article I wrote for the July issue of St. Anthony Messenger magazine.

https://blog.franciscanmedia.org/sam/mister-rogers-legacy
Posted by Janice Lane Palko at 7:01 PM No comments: