It was the summer of 1981, and my boyfriend at the time, who is now my husband, had a college friend from Philadelphia come to town for the Pirates-Phillies game. We had great seats for the night game at Three Rivers, about 20 rows back on the first base side. I was a big baseball fan back then and knew I had to pay attention as we could easily get hit with a line drive foul ball. Sitting in the row in front of us, were several nuns from the convent at St. Benedict Academy, where I had attended high school. I had none of them as teachers, so they didn’t know me. I just recognized their faces.

Garry Maddox of the Phillies came up to bat and fouled off a high fly ball in our direction. I had already stated that if a foul came our way, I was going to duck as I had no chance of snagging a ball with all the tall men sitting around me.

When Maddox’s ball sailed our way, everyone in our section jumped out of their seats to try to catch it while I ducked and covered like I was awaiting a nuclear blast. I heard the thud of the ball hitting something and spring somewhere as people clamored and shouted, “Where did it go?” Fans scrambled around the stands searching for the coveted foul ball.

As I stared at the floor, hands over head, the ball rolled under the nun’s seat in front of me. My first thought was from that little angel, I should let the nuns get it. Then that little devil on my other shoulder said, “the Lord helps those who helps themselves,” and I reached down and scooped up the foul ball. I stood up with the ball in hand like I was the Statue of Liberty holding her torch and said rather sheepishly, “I got it!”

People around me cheered for me, patted me on the back, and men in the stands that I didn’t even know wanted to shake my hand, treating me like I was some kind of hero, like I’d snagged a blistering line drive instead of picking up a ball that had rolled to me.

I was glad I got the ball, but it was from a Philly, so I wasn’t as thrilled as if I’d caught one off a Pirate bat. I stashed the ball in my cedar chest, and over the last 40 some years, I’d take it out every now and then and show it to my kids to impress them that their mom “caught” a foul ball. I’d tell them that it was from Garry Maddox, known as the Secretary of Defense for the Phillies, and on cue my husband would chime in with, “You know what they said about Garry Maddox, ‘Two-thirds of the earth is covered by water, the other one-third by Garry Maddox.’” 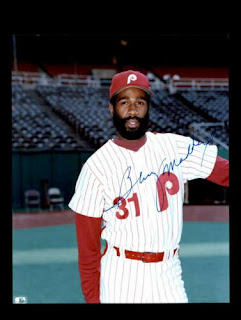 This past Memorial Day I learned something else about Garry Maddox. The American Thinker had an article written by Will O’Toole, who talked about MLB players who served in Vietnam. Unlike World War II, where most eligible young men, including many MLB players, served their country, the Vietnam War was not like that. Most MLB players didn’t serve their country—but Garry Maddox did. One of nine children, he enlisted at 19 and served in Vietnam until his father suffered several heart attacks and Maddox applied for a hardship discharge to help support his family. He then pursued his MLB career.

I was treated like a hero for picking up a fly foul ball, but until this year, neither I nor my husband knew that Maddox was a Vietnam veteran who selflessly served his country and who should have received more recognition for his heroic sacrifice.

However, you can be sure of one thing and that is the next time I pull out that foul ball and tell the story of how I got it, I’m going to tell people that it was off the bat of Garry Maddox, a great baseball player and an even greater hero.

This article originally appeared in the July issue of Northern Connection magazine.

Posted by Janice Lane Palko at 1:34 PM No comments: