Woman's World Magazine Picks Up on My Story

You know a story hits home, when someone tells it again.  Last year, I wrote an article on Bruce Russell, and how he and the daughter he gave up for adoption 40 years ago were reunited.  It originally appeared in Northern Connection magazine, the publication of which I am the executive editor.  Many readers responded saying how moving the article was.  A few weeks ago, I was informed by the Russell's that Woman's World had contacted them after seeing my article and wanted to do a feature on them.

That article is now on stands and it is a nice contrast to my article as it focuses more on what the daughter's feelings were.  I can't give you the link as they don't post their articles, but it is on the racks right now.

For those of you who missed my story the first time, click on the link below for Northern Connection and scroll to page 12 or read the original article below it.

A Daddy of a Plan

Like most new fathers, Bruce Russell beams with pride when he talks about his daughter, Julie. What’s different is that Russell, of Ross Twp., is 61 and it took nearly 40 years to meet his child. In 1971, when he was heading into his senior year at Slippery Rock University, his former girlfriend, who had broken up with him the month before, called to tell him she was pregnant with his child. After much consideration, they decided it would be best to give the baby up for adoption.

The child was a girl and Bruce never got to see her. “That was something I really regretted,” he said. Bruce resumed his life and eventually married his wife Karen when they were both in their forties.

“I’ve known about the baby since our third date,” Karen said. “When we started dating, we both sensed that this relationship was going to be lasting, and Bruce confided in me about her.” Besides Karen the only others who knew about the baby were Bruce’s parents. “My brother was in the service at that time, and we decided that he didn’t need anything else to worry about,” Bruce said.

Then last August everything changed. “I picked up the phone and it was the Pittsburgh Children’s Home” Karen said. “I assumed it was one of Bruce’s clients. When I asked if I could help, the woman said they could only speak to Bruce. I immediately called him at work.” When Karen told him the Pittsburgh Children’s Home was looking for him, he knew exactly why. “I’d never stopped thinking about or loving my baby, and I had always had this gut feeling that if she is like me at all, she’ll contact me,” Bruce said.

After Bruce called them back and verified that he was the Bruce Russell they were looking for, he remembers telling the woman, “You don’t know what good news this is.” His daughter, Julie Morse, a professional bassoonist and music teacher who is married with two children and lives in Phoenix, then contacted him by e-mail. In the initial message she told Bruce about her life, and the similarities between hers and Bruce’s are uncanny. Julie related that she had been placed with loving parents who lived in the Pittsburgh area until she was five. Her family then moved to Baltimore.

She told Bruce that she was athletic and loved music and had to decide between the two when she entered Ithaca College. “What was amazing is that I always loved athletics and music too. I’m a phys ed major. I grew up near Albany and moved to Pittsburgh. She was born in Pittsburgh and attended college in Ithaca and lived near Albany for a while and even chose to work in the Catskills just as I had,” Bruce said. “She wrote that she often thought of becoming a marine biologist, and I don’t know how many times I’ve told Karen that if I had my life to do over, I think I’d be a marine biologist.”

Another similarity is their sense of humor. In one of the paragraphs Julie told Bruce that she often fantasized that her biological father had been a member of the rock band Rush. “I burst out laughing, and realized that like me she often resorts to humor,” Bruce said. They e-mailed each other every day for a month and then exchanged photos. And the similarities between the photos they swapped are enough to induce chills.

Although the relationship was developing smoothly, both moved cautiously. They were both conscious of not slighting Julie’s adoptive parents whom Bruce feels he owes a debt of gratitude. “When I heard about all her accomplishments and the things her parents had done for her, I knew we’d made the right decision. I could have never given her the wonderful life that they did.” Bruce has written her parents a letter expressing his appreciation.

Then Bruce and Karen began to tell family and friends about their new-found daughter and her family. When asked how difficult that was, Bruce said: “I was so happy, I told anyone who had a pulse. I swear I was beaming so much Karen was suffering scorch marks.” His only regret is that his parents will never know their granddaughter. His father passed away a few years ago and his mother has Alzheimer’s disease. “After the adoption, my parents never mentioned it ever again. I think if they had, it would have made it real, and they would have missed her too much.”

This past January Bruce and Karen flew to Phoenix to meet Julie; her husband, Saul; son Ian, 11; and daughter Evelyn, 8. They were met at the airport. “The first time I saw her, I looked into her eyes, and it was like I saw myself looking back at me,” Bruce said. “I had planned to video the meeting,” Karen said with a laugh, “but I started crying and the video is a disaster. All you see is feet and hear everyone sniffling and crying.” The Russells spent four days with Julie and her family doing things that fathers and grandparents do.

“I hate to make it sound like it was all rainbows and roses, but it was,” said Karen. Bruce was mindful of how this was affecting Karen too. “I’m now sharing him with someone else,” Karen said, “but he’s kept me in the loop on everything, showing me every e-mail. Bruce has changed. There’s a side of him I’ve never seen before. He seems much more at peace.”

There was a moment during their visit to Phoenix that stands out with Bruce. “Julie and I stood in front of a mirror and looked at ourselves together, and I just felt complete. My heart got bigger.” In addition to e-mails, they talk every Sunday and the calls last for over an hour. This month Julie and her family are coming to Baltimore to visit with her parents, and the Russells are traveling there too. They hope that in the future Julie will come to Pittsburgh because family, friends and neighbors would love to meet her.

In one of her e-mails to Bruce, Julie referred to herself as a mistake. Bruce forbade her to ever say that again. “I told her that she may not have been in my plans, but you certainly were in God’s.”

You Know Talent When You See It!

I'm no Simon Cowell, but there are times in your life when you come across real talent, and even the untrained recognize it.  Several years ago, I had the pleasure of hearing Jackie Evancho sing before she became famous at the local Kean Idol talent contest.  When this pint-sized Pavarotti got up (I believe she was 8 at the time) and belted out Con te Partiro, goosebumps rose all over my body and tears came to my eyes.  Her talent was so extraordinary, I thought to myself, the hand of God is on her--she has been Divinely endowed.

Much earlier in life, I also ran across another amazing talent.  My friend Marianne Krostyne made me a felt Christmas ornament in my junior year of high school that served as a gift tag for a present she had given me in a grab bag.  I don't remember what the gift was, but I remember that tag because I hang it on my Christmas tree every year.  It was painstakingly intricate and precisely beautiful.  It was apparent then that she was blessed with a special talent.

This month as a writer and editor for Northern Connection magazine, I had the pleasure of interviewing her about her career as a theatrical costume creator.  Her work is exquisite.

I once told someone that I love to write because when I'm doing it, it feels like I'm tapping into the live wire of creation, which is God.  It is so energizing and profound.

There are things that I have written and gone back and read years later that have amazed me that those words came from me they were so good. Clearly, they weren't from me.  They were Divinely inspired.  (The crappy passages were my work.)  Rush Limbaugh's tagline is "Talent on loan from God." That's what I feel about my writing.  Michelangelo's Creation of Adam springs to mind.  I feel like Adam reaching out and touching God.  It is the ultimate jolt. 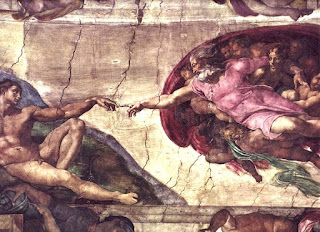 Marianne and Jackie's work are awe-inspiring, and like all great works theirs resonate because of its beauty.  I don't know Jackie, but I do know Marianne and I'm sure she would agree that her talent is a gift from God.

Read about Marianne in this month's edition on page 28 of the download.